On Shaheed Diwas of Bhagat Singh, artistes talk about how ideologies of the revolutionary continue to inspire : The Tribune India

The Wanted fans hold vigils for Tom Parker across the…

The 23-year-old freedom fighter Bhagat Singh was martyred on this day in the year 1931 alongside revolutionaries Sukhdev Thapar and Shivaram Rajguru. The inspiring stories and ideals they have left behind have moved many. On this Shaheed Diwas (Martyr’s Day), we talk to artistes who have been inspired by Bhagat Singh and others who were lucky enough to be a part of projects based on their life and work.

I remember fairs were organised in our village on the occasion of Bhagat Singh’s birth anniversary. Bhagat Singh was the hero in our formative years. I once wrote a poem on desh bhakti. For the first time, I recited that poem which had names of Bhagat Singh, Rajguru and Sukhdev on Dihati Programme on All-India Radio, Jalandhar in 1975. That patriotic poem was my first step towards entertainment career.

Let’s keep him in our heart

When we were kids, grandma used to tell us stories of Bhagat Singh. And when I grew up, he was present in the Sath (village) discussions. So, one cannot miss Bhagat Singh if one is living in Punjab. I like any other child would read about him. I did not get to play him on screen, but I played one of the revolutionaries in the film, Shaheed-E-Azam. I came to know about many lesser-known freedom fighters such as Rehmat Ali, my character in the film. The relevance of Bhagat Singh’s ideologies has often been talked about but the need of the hour is to keep him in our heart. Especially, the youngsters have to imbibe the values, and his sacrifice shouldn’t be limited to a mere textbook chapter.

I was born in Gujjarwal village in Ludhiana which is close to the village where Kartar Singh Sarabha once lived. We have seen how celebrated that village was. He was the member of the Gadar party just like Shaheed-E-Azam Bhagat Singh. So, introduction to the places of historical significance in Punjab and how at such a young age of 19 and 23, Kartar and Bhagat Singh sacrificed their lives so that others could taste freedom. I always wanted to bring youngsters closer to the freedom fighters which led me to bring out not one but two musical albums, Pranam Shaheedan Nu and Faansi on the freedom fighters. I truly believe that the millennials today should be educated about legends like Bhagat Singh through music and visual content. The government should also make efforts to document and record all the creative content in the national interest. Bhagat Singh and many like him weren’t just men who sacrificed lives but represent the change the nation needs.

I have done theatre and I have played Bhagat Singh in one of my favourite plays, Chippan Ton Pehlan, which sheds light on Bhagat Singh’s last days in Lahore Central Jail. Punjab is the land of many freedom fighters and yet each revolutionary’s story evokes the same emotions. The ideals for which they lived and died were not just about fighting against the British rule. Bhagat Singh was well read and his thoughts and ideas of freedom and equality were not restricted to the boundaries of India. He believed in equality. We need to propagate their beliefs through Punjabi songs rather than singing of gangs and guns which distract the youth of Punjab. 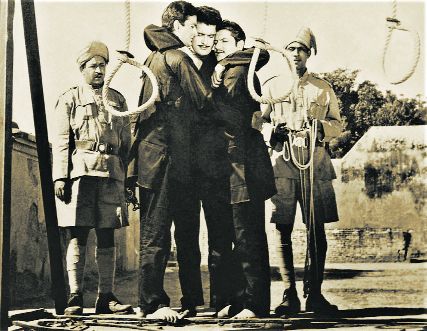 Among the three films on Bhagat Singh that released in the same year (2002), the song Mera Rang De Basanti, sung by Sonu Nigam and Punjabi singer Manmohan Warris, was the most loved version. AR Rahman had composed the soundtrack whereas Sameer Anjaan was the lyricist. Another song, Rang De Basanti Chola Maye, of 23 March 1931: Shaheed had the voice of singers Udit Narayan, Veer Rajinder and Bhupinder Singh.

Which Ryan Reynolds Character Are You: Deadpool, Guy, Or…

Euphoria's Alexa Demie Get Ready For the Season 2…

Judd Apatow Is Working On a ‘This Is 40’ Sequel