Blac Chyna Says She Is “Refocused” On Lawsuit Against Kardashians For Getting Her Reality Show Cancelled: What They Did Was So Wrong!

Blac Chyna Says She Is “Refocused” On Lawsuit Against Kardashians For Getting Her Reality Show Cancelled: What They Did Was So Wrong!

Looks like Blac Chyna and the Kardashian’s will face off in court soon.

The socialite said she’s refocusing her energy to trial. Preparing for the upcoming lawsuit against the Kardashian clan, who allegedly got her show cancelled from E!, costing her emotional and financial stability.

Model and social media star Blac Chyna is not backing down from the fight against the famed Kardashian family. Chyna, who starred in a reality TV series on the E! network back in 2017 with then boyfriend Rob Kardashian, is suing his mother Kris Jenner and a few of his sisters for getting the series cancelled. The pair share a daughter together, 5-year-old Dream Kardashian.

Shortly after the shows cancellation, Chyna made allegations against momager Kris Jenner, claiming that production of the spin-off series was almost impossible due to her interference. Additionally, Chyna claims that while producers were ready to shoot season two, the Kardashian’s used their sources at E! to have the show pulled because they didn’t like her. The family starred in E!’s “Keeping Up With The Kardashian’s” for 20 seasons, essentially skyrocketing the family to stardom.

Though the lawsuit was filed immediately after the series ended, the case is just now going to trial. Following a child support exchange between her and her children’s fathers, the 33-year-old socialite said she’s refocusing on the upcoming trial that begins in less than two weeks. Via instagram she wrote:

“I plan to refocus my attention on my trial against Kris Jenner and her daughters Kim, Khloe, and Kylie which starts in 13 days. When they got my #1 hit show killed back in January 2017, that not only hurt me financially and emotionally, that hurt my beautiful KIDS.”

“I’m taking them to court to stand up for my legal rights and to be an example to my kids that whats right is right, and what’s wrong is wrong. And what they did was so wrong.” 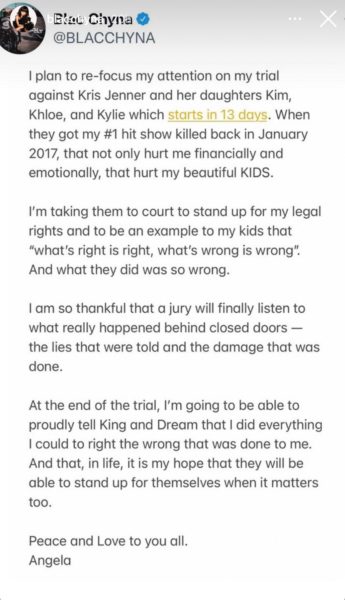 Chyna also stated  that she’s thankful a jury will get to judge the case after seeing what “really happened behind closed doors”. Additionally, the mother of two says she’ll be happy to tell her son King, 9, – who she shares with Tyga, and daughter Dream that she did her best to right wrongs done to her. Effectively teaching them to stand up for themselves when necessary. 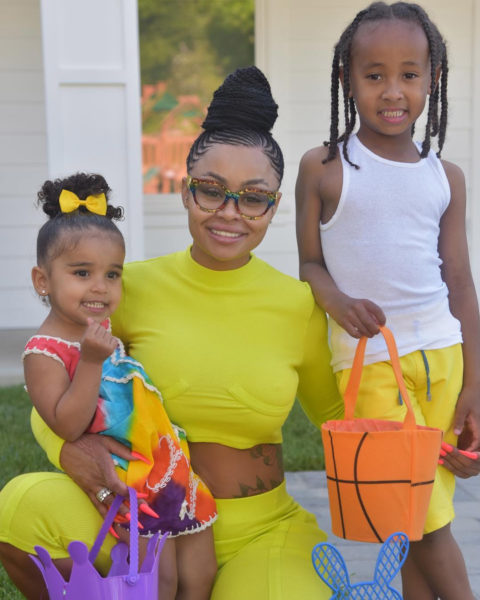 Following the original announcement of the suit, lawyers for the Kardashian family denied the claims. Stating it was Chyna who made production difficult due to her restraining order against Rob. Sources also claim that the network had a number of reasons to end the show. Insinuating the series was not as popular as Chyna believes it to be.

Do you feel Blac Chyna has a solid case against the Kardashians? Leave your answer in the comments!

BaubleBar 20% Off Sale Last Weekend to Shop: The 24 Best…

‘West Side Story’s Ariana DeBose Felt Visited By The Spirit…