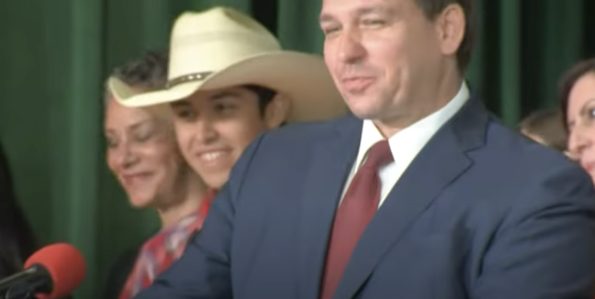 Certain Floridians could be limited in the future in how they talk about race.

Florida lawmakers have reportedly passed a bill to limit discussions on race at school and in the workplace. The bill, nicknamed the “Stop Woke Act,” reportedly passed the state Senate on Thursday and will now move to Gov. Ron DeSantis, who is likely to sign it into law.

The bill, in laymen’s terms, would prevent staff or teachers from making someone feel guilty about their race. Gov. Ron DeSantis, 43, first proposed the bill in December of 2021 amid the debate over critical race theory, defined as “a group of concepts used for examining the relationship between race and the laws and legal institutions of a country and especially the United States.”

“In Florida we are taking a stand against the state-sanctioned racism that is critical race theory,” Gov. Ron DeSantis said at the time.

“We won’t allow Florida tax dollars to be spent teaching kids to hate our country or to hate each other. We also have a responsibility to ensure that parents have the means to vindicate their rights when it comes to enforcing state standards. Finally, we must protect Florida workers against the hostile work environment that is created when large corporations force their employees to endure CRT-inspired ‘training’ and indoctrination.’”

The latest update on the bill comes just days after the Florida legislature advanced the “Parental Rights in Education” bill, also known as the “Don’t Say Gay” bill. Under the act, teachers would be limited on what they can teach students about sexual orientation and gender identity. Those who don’t oblige could be sued by parents. The bill has been met with widespread backlash from LGBTQ+ activists who feel it is discriminatory. It is unclear whether DeSantis will sign it, but he has shown his support for the act in the past.

What do you think about the latest bill to pass? Let us know in the comments!

Previous The Batman Cast In Their First Roles Vs. The Movie
Next We’ve Been Singing Katy Perry’s “Firework” Wrong