That’s Not Even Her Real Name: 70 Fascinating Facts…

Britney Spears Shares Insight Into Her Bond With Sons Sean…

Just more than three months after being found guilty on five felony counts, including lying to Chicago cops, over an alleged 2019 hate crime attack, former Empire actor Jussie Smollett was sentenced to 150 days in jail Thursday, starting immediately. While avoiding state prison, the incarceration comes as a part of an overall sentence of 30 months probation, $120,106 in restitution to the Windy City, and a further $25,000 fine.

When the sentence was unveiled and deputies prepared to take him to the Cook County Jail, Smollett pulled off his mask, stood up and repeatedly said, “I am not suicidal.”

“If anything happens to me in there, I did not do it,” the actor exclaimed. Led out of the courtroom, Smollett raised his fist in the air and yelled “I am not suicidal, I am innocent!”

Jussie Smollett after the sentencing: “I am not suicidal. If anything happens to me when I go in there, you must all know that.” pic.twitter.com/xe2wYpQJ4O

Facing up to three years in prison on each charge and tens of thousands of dollars in fines on the felonies for the well-publicized case, Smollett was always looking unlikely to get the maximum by Cook County Judge James Linn because of his lack of a previous criminal record. Although an argued motion to toss out the December 9 verdict and get a new trial failed earlier in today’s hearing at the Leighton Criminal Court Building in Chicago, defense attorney Tina Glandian and Smollett’s other lawyers made it clear before and after sentencing they plan to appeal.

Promising no “cookie cutter justice,” Linn said from the bench in announcing sentencing that he didn’t believe he could make the findings to hand down consecutive sentences on the five Class 4 felonies. Speaking directly to Smollett, the borderline angry judge told him that Smollett turned his “life upside down by your misconduct and shenanigans” by “hoaxing racial and homophobic hate crimes.” Saying he “didn’t know where to begin,” Linn castigated “selfish, arrogant and narcissistic” Smollett for his “pre-meditated” actions in the context of the commitment to social justice that was fundamental to the performer’s upbringing, life and career.

“You really craved the attention,” Linn speculated on Smollett’s motivations as he centered on the assumed “damage” to true hate crime victims and reporting that the performer has caused. “You wanted to make yourself more famous …throwing a national pity party for yourself.”

“You’re just a charlatan, pretending to be the victim of a hate crime,” Linn concluded of “toxic” Smollett. “You committed hour upon hour of pure perjury,” he went on to say of the performer’s stint on the stand in his own defense late last year. 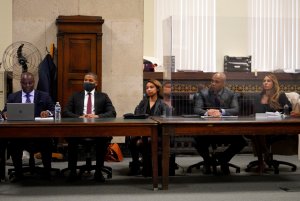 In a shift from the 2021 trial, almost none of the principals were wearing a mask in courtroom today as plexiglass protected special prosecutor Daniel Webb, deputy special prosecutor Sam Mendenhall, prosecutor Sean Wieber and team, as well as the defense, as they addressed Linn before sentencing. The most noticeable exception to that unmasking was Smollett himself. With his sister, Lovecraft Country star Jurnee Smollett, in the courtroom with other family members, the performer sat mostly inscrutably at the defense table with a black mask on throughout almost all of the proceedings, which kicked off just after 11 a.m. PT.

“I’ve never had a trial that has been argued as extensively as this one,” a patience-strained Linn said at the end of the motion arguments from both sides. “We’ve talked about this for two years — I do believe that at the end of the day, Mr. Smollett received a fair trial,” he added. After passionately presenting his own argument against the defense, Linn deep-sixed any notion of a new trial.

Railing against Smollett’s “fake hate crime” and his refusal to show “a single act of contrition,” Webb took to the podium late in the proceedings to again accuse Smollett of “knowingly” denigrating “true hate crimes” in his actions. In his vehement remarks on sentencing, Webb for the first time recommended “prison time” for Smollett, as a well as financial restitution to the city of Chicago, taking a previously paid $10,000 as a “credit.”

In his response, defense lawyer Nenye Uche called Webb’s recommendations “overkill, beating a dead horse.” He added: “And that is not justice, that’s retribution.” Before the sentencing, Smollett declined the opportunity to speak beyond a “No, your honor” when asked by Linn whether he had anything to say.

Initially erupting with calls of compassion and outrage, including from then-President Donald Trump, the emerging details and contradictions of the alleged pre-dawn January 29, 2019 assault on Smollett soon turned the actor into a source of derision.

Flipping on their pal, brothers Abimbola and Olabinjo Osundairo’s revelation that Smollett had paid them $3,500 by check and $100 in cash just before the attack during that cold night tore away much of the sympathy for the actor, who most famously played middle son Jamal Lyon on the blockbuster Lee Daniels- and Danny Strong-created primetime soap Empire for five seasons. Although Smollett and later his lawyers repeated that the money given to the Osundairos was for help getting the actor in shape for a music video, he was dumped from the show’s sixth and final season.

Once the siblings confessing their part in the scheme after being held for hours under interrogation by Chicago cops, a pervious light-handed legal system also turned against Smollett almost as fast as public opinion.

While Cook County State’s Attorney Kim Foxx’s office tossed out the original case against Smollett after he forfeited a $10,000 bail, the outcry saw ex-Iran Contra lawyer Webb brought aboard as a special prosecutor in the summer of 2019. In February 2020, as Smollett came up short trying to get the new probes dismissed, Webb indicted the actor on the six felonies. As was true of so many cases in America in 2020 and 2021, the trial was delayed for over a year because of the Covid-19 pandemic.

Although the jury came down hard on Smollett today on five of the six Class 4 felonies (the lowest level under Illinois’ disorderly conduct statute) after only nine hours of deliberations, there was one ray of sunshine for the Empire alum: The performer was found not guilty of making a false police report in the days after the so-called assault, claiming he was the victim of an aggravated battery.

Before today’s sentencing hearing, the likes of the Rev. Jesse L Jackson, members of Smollett’s family and circle, director of BLM Grassroots and co-founder of BLM Los Angeles Dr. Melina Abdullah, Alfre Woodard, Samuel L. Jackson and spouse LaTanya Richardson Jackson sent letters to Linn asking for “mercy” for the actor, to quote the correspondence from the Oscar nominee. Civil rights icon Jackson put the matter in the starkest terms, warning of the risks facing “well-known, nonviolent, Black, gay man with Jewish heritage” in prison. Dragging out today’s hearing, those letters were read aloud for the record in the courtroom.

Unlike the nearly two-week-long trial last year, cameras were permitted in the courtroom today. However, also unlike last year, there was no coverage of the sentencing hearing on the usual cable news suspects of CNN, MSNBC and Fox News Channel. The trio were almost wall-to-wall on the latest horrors of Russia’s now nearly two-week invasion of Ukraine.

As for Smollett, the performer is still technically facing a civil suit from the City of Chicago over the manpower and resources spent on the police investigation into the alleged hate crime. Just as the trial got underway last December, authorities reiterated that they still intend to seek the around $130,000 they’ve estimated Smollett cost the now Mayor Lori Lightfoot-run metropolis. “The city is a victim of Mr. Smollett’s crimes because his false reports caused CPD to expend scarce resources that could have been devoted to solving actual crimes,” read a filing earlier this week from the superintendent of the Chicago Police Department.

The paperwork from the city’s top cop and a lawyer suggested the prosecutors should recommend to Linn that he order Smollett to pay the $130,106 ASAP — which is exactly what deputy special prosecutor Mendenhall did in reading out a letter form the CPD for the overtime expenses.

As is typical in such hearings, in the hopes of a reduced sentence, various character witnesses such as Smollett’s media-“challenging” 92-year old grandmother Molly Smollett and ex-Empire musical director Rich Daniels took the stand to praise the “justice warrior,” as the elder Smollett called her grandson, who teared up.

Making a point of noting Smollett’s charitable works over the years, Daniels (no relation to Lee Daniels, it seems) tried to put the vast success Empire enjoyed in its early seasons and the sudden superstar status Smollett achieved in context. Daniels noted how few TV shows make it more than five seasons and that the “lightening in a bottle” debut of the hip hop drama in 2015 was watched by more than 30 million viewers some weeks.

At least for the next five months, Smollett will now be watched over by Cook County deputies.

That’s Not Even Her Real Name: 70 Fascinating Facts About Meryl Streep

Traci Braxton Dead at 50 From Cancer